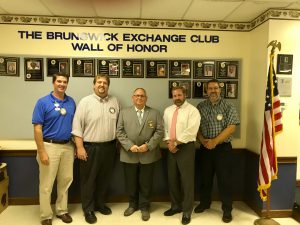 The Exchange Club of Brunswick was honored to have Sheriff Neal Jump speak to the Club recently. Sheriff Jump spoke on Patriots Day, September 11th. He memorialized the men and women who gave their lives on September 11, 2001 and the others that have died from complications from being at Ground Zero. Sheriff Jump also spoke to the Club about the Sheriff’s office, from managing the jail to guarding the courthouse and judges.