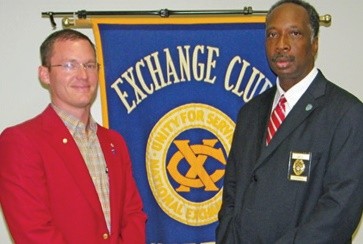 The Exchange Club of Waycross heard some eye opening facts from Waycross Police Department Detective, Larry Hill on gang activity, . Hill has been a department member since 1994 as a part of the investigative unit. He investigates crimes, works as a hostage negotiator, a finger print investigative expert and a SCS task force (state) member. He is a 2003 “Officer of the Year” recipient. Officer Hill investigates gangs here and gives talks to High School Students about the dangers of being in a gang. He recommended paying attention to kids going through a tattoo stage which is a fad going away and on a negative trend. In Jacksonville, teens shoot one to move up in gang rank. Members sell drugs to fund the gang. They have a kickback party at homes, motels to get money to put back to pay lawyers for getting members out of jail. Their meetings are structured with ranks and code literature. They take pledges, names and ranks. Mexican gang is starting prostitution here to fund gang. Hill recommends watching if kids’ grades are dropping.Ten gangs are operating in Waycross. He recommends putting teens in church. Check who they are friends with and their backgrounds. Teens join gangs to get love and acceptance that they don’t get at home. Teens imitate gangs on T.V. Looks like more money and staff are needed to reverse this trend with more community involvement.