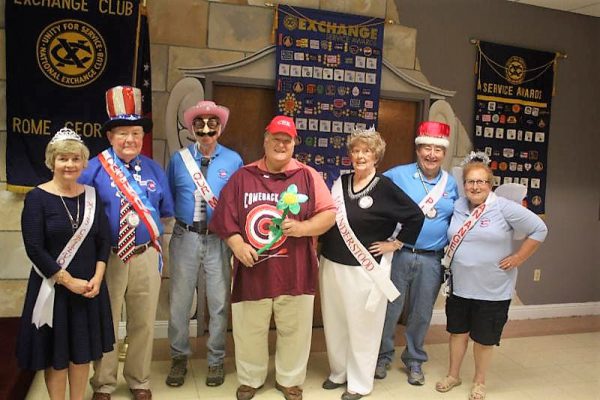 Rome has a Pageant.  The Exchange Club of Rome has a rather unique way of bringing levity to one special meeting a month by “honoring (?)” certain members of their club for activities in their club.  This special program was the idea of Rome member Wanda Whitten, for whom the Georgia District Exchange Clubs All American Volunteer Award is named. Not only does she have her thumbprint on so many projects in Rome, but she is a veteran volunteer in the Miss America Pageant organization in Georgia, hence the Exchange Club of Rome Pageant.  For the club pageant, Wanda is Miss Understood.  The pageant added a new member this year, District Treasurer Bryan Shealy who from now on will have the name The Comeback Kid because of his rebound from serious illness and coming back on board to once again run the Coosa Valley Fair as President.  Shown in their splendor from left to right are Barbara Carter, Miss Chevious, Giles Chapman (Georgia District A.C.E. Award Chair) Captain America for his tireless work on the club’s Americanism Committee, Scottie Edwards (District Volunteer of the Year) Our Yard Man for his repeated sponsorship of yard sales to raise funds for club community projects, Shealy, Whitten, Buzz Wachsteter (District Exchangite of the Year), King P.I.T.A.(if you don’t know what that means ask someone), and his wife Paula known as An Angel for living with the King.  It’s always a hilarious program that the club looks forward to every year.