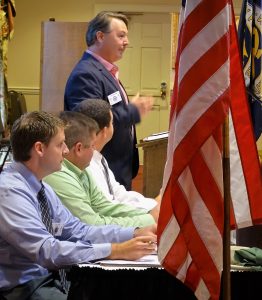 It was strictly business at the meeting of the Exchange Club of Dublin, and that business was bringing home to fellow Exchangites the message and the news from the National Convention in Jacksonville.  The club heard about the National Exchange Club “Veterans Matter” program featured in one of the many seminars held, they were shown pictures and heard about the National winners of the A.C.E. Award and Youth of the Year, what was learned about recruiting new members, and the possibility of hosting the “Tomb of the Unknown Soldiers” project of the Exchange Club of Rome that was on display in Jacksonville and won the National Community Service Award for Americanism.