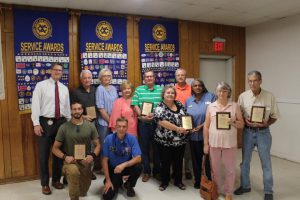 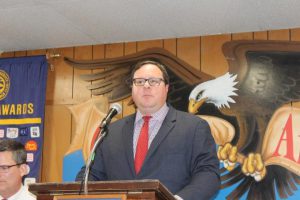 The Exchange Club of Albany recently presented Proudly We Hail awards to various businesses and individuals in the community. They also heard from a local veteran on what this and the flag mean to him.

In honor of Patriotism, Army Veteran Eric Hopper spoke to the Albany Exchange Club about what the American flag and patriotism means to him.

Eric is a graduate of West Point and was in the initial group deployed to Baghdad.

Hooper’s philosophy on patriotism is a reflection of what we as Americans value and find important.

The American flag represents Freedom and Liberty for everyone in our great nation. The Flag also represents freedom around the world.

Army Veteran Eric Hooper gave us his definition of the flag by a veteran:

1. The red stripes represents the blood lost in battle.

2. The white stripes represents the sacrifice made by our citizens

3. The blue back ground represents courage of our nation.

4. The fifty stars represents the 50 states as one nation under God.