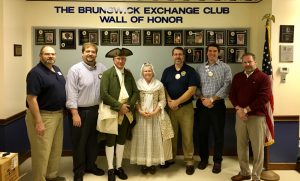 The Exchange Club of Brunswick recently hosted Marshes of Glynn Chapter Georgia Society Sons of the American Revolution as guest speakers. Jimmy Boatright and Steven Hinson told the club about S.A.R. and their mission of bringing history to life in the local schools. They told the club how to join S.A.R. Katharine Trackwell of the Brunswick Chapter of the Daughters of the American Revolution spoke to the club about Sybil Ludington. Sybil Ludington, of Putnam County, NY, is celebrated as a heroine of the American Revolutionary War. On the night of April 26, 1777, at the age of 16, she reportedly rode to alert militia forces in villages of Putnam County, NY and Danbury, CT, to the approach of the British regular forces.