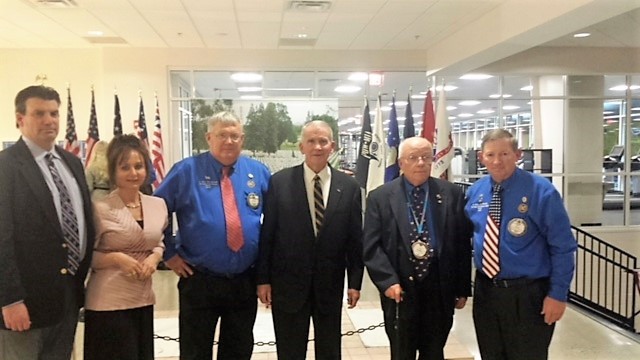 It is not often that a call is received and on the other end it is said, “This is the White House. Please hold for the President,” but this was the call received by Rome Exchange Club member Bill King. King is the Chairman of the club’s national award winning Americanism project, A Call To Honor…The Tomb Of The Unknown. President Donald Trump called King and told him that he had been made aware of the club’s project, seen pictures of it, and wanted the Exchange Club of Rome to know that he was proud of their efforts and proud of the sense of pride in America that was being shown when there were so many trying to be so critical of our country. POTUS also told King that he was aware that the Rome Club was trying to bring the project to Washington to be displayed at Arlington Memorial Cemetery’s visitor center and if logistics could be worked out he would like to see the project also brought to the White House so staffers could view the tomb there and not disrupt the solemn presentations at Arlington.

Representatives of the Rome Club continue to work to solidify arrangements with Arlington so the Tomb Project, an exact 1/2 sized replica of the Tomb of the Unknown, may be put on display some time in May. The club continues to receive requests from all over the country for appearances of the project and bookings have been requested already into 2019.