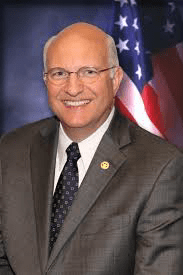 The Exchange Club of Macon has awarded the Book of Golden Deeds to  Sheriff David Davis. The National Exchange Club website offers the following concerning the award: “The National Exchange Club’s longest running project, the Book of Golden Deeds Award, recognizes dedicated volunteers who give endless hours of their time and talents toward making their communities better places to live.” Sheriff Davis has made many contributions to the Macon community, including: guiding the successful merging of Macon Police Department and Bibb County Sheriff’s Office; along with his command staff and deputies, Sheriff Davis conducts “Walks for Safety” through neighborhoods in an effort to be visible and available for questions, issues, concerns, and ideas; partnered with Macon-Bibb Animal Control to establish the “Bondable Pups” program which pairs Bibb County inmates with a dog from Animal Control to provide social growth for both inmates and the dog; and Sheriff Davis consistently makes time for speaking to community groups, civic organizations, and religious groups. Sheriff Davis commits himself deeply to his staff, and makes a personal investment into their well being.