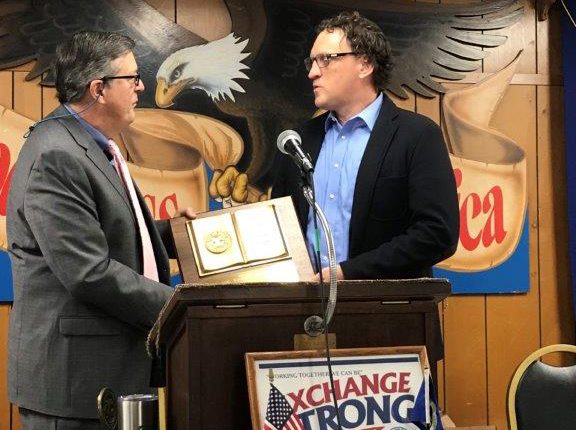 The National Exchange Club’s longest running project, the Book of Golden Deeds Award, recognizes dedicated volunteers who give endless hours of their time and talents toward making their communities better places to live.  This year’s recipient of the Exchange Club of Albany’s award,  Dr. Kerry Reeves, is dedicated to the community along with service to others in many ways. He was a very successful Optometrist in NC in 2009 when he felt the call to sell everything and move to Haiti to provide medical and eye services along with ministry. He ended up being there with his wife and five children when the earthquake happened and ended up doing may other things while he was there. Beside working in Haiti he also adopted three more children from Haiti. He moved back to the states about 4 years ago and associated with a large optometrist in Albany. He continues to serve the community in many ways and about 18 months ago he became bi-vocational again as Senior Pastor for a church. He remains dedicated to serving in our community and take groups back to Haiti to help them in many ways.

As Chuck Knight, Chairman of the Book of Golden Deeds, said in his remarks that Dr Kerry Reeves is best described as “Anonymous Servanthood” because nothing he does is for his recognition.